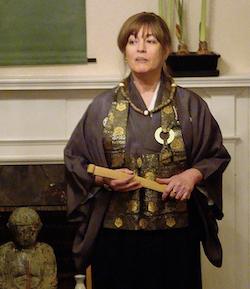 Joan Sutherland first met the koans as a teenager, inspiring her to pursue a bachelor’s degree in Chinese and a master’s degree in Asian languages from UCLA, where she focused on Buddhism and poetry. Her graduate adviser warned her to leave academia while she could still translate, so she did, to study and work with Marija Gimbutas, archaeologist of pre-Indo-European cultures, and Diane di Prima, poet and practitioner of Buddhist and Western esoteric traditions. She also worked as a book editor and for feminist anti-violence and health activism organizations. After practicing in the Sōtō Zen and Tibetan traditions, she returned to her early love, completing her koan study with John Tarrant, Roshi and receiving transmission in 1998, becoming the first woman roshi in her lineage in the Americas. They cofounded the Pacific Zen School, a school of deep roots and innovation, in Northern California. She went on to convene The Open Source, a network of communities in the western United States led by her dharma heirs. She lived in Santa Fe, New Mexico for years, teaching with Awakened Life, the community that gathered there around her work. She retired in 2014 because of her health, to write and dream and put a lifetime’s work into some kind of transmittable shape. She now lives next to the Pacific Ocean in Northern California, and Cloud Dragon: The Joan Sutherland Dharma Works disseminates her work. 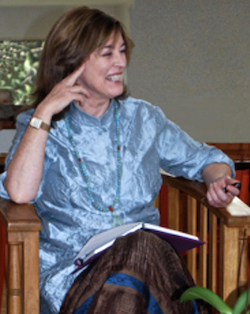 Her books include Through Forests of Every Color (Shambhala, 2022), Vimalakirti & The Awakened Heart, and Acequias & Gates : Miscellaneous Koans and Miscellaneous Writings on Koans (Gates available here). Her articles in Lion’s Roar, Shambhala Sun, and Buddhadharma magazines are archived here; recent writing shows up at Little Birds on Patreon. She is a translator from classical Chinese, working on a long-term project to translate the major koan collections. Her work is the subject of a short film, The Radiance of the Dark, evoking her vision of an awakening that embraces endarkenment as well as enlightenment.

Joan Sutherland’s work with students has been about discovering how the koans can vivify, subvert, and sanctify our lives. Her work in community has been about creating cultures for which koans are the traveler’s phrasebook. In retirement she’s been exploring the primordial spirit of the koans as bits of the Earth’s wisdom rising through us, bringing inspiration and solace in a time of crises like our own.