The Open Source is a network of teachers, communities, and individuals in the western United States engaged in this koan way together. Joan Sutherland was the founding teacher, and the network is led by her dharma heirs.

Sarah Bender, Roshi is the teacher for Springs Mountain Sangha in Colorado Springs, CO. From 2007 to 2013 Sarah served as Cadet Chapel Buddhist Program Leader for the United States Air Force Academy. She is also a learning disability specialist in private practice.

Andrew Palmer, Sensei leads the Common Way Meditation Community, based in Colorado Springs. He has taught at Springs Mountain Sangha and served as the Buddhist Program Leader for the Cadet Chapel at the Air Force Academy (2013-2020). Andrew's website Bow and Roar.

Tenney Nathanson, Sensei founded Desert Rain Zen in Tucson, AZ with Jennifer Sellers in 2008. He has served as Desert Rain Zen's resident teacher since 2012. Tenney teaches in the University of Arizona English Department and helps lead the arts collective POG. 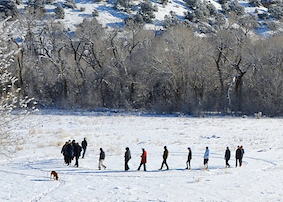 Awakened Life is the community in Santa Fe, New Mexico where Joan Sutherland taught until her retirement in 2015. It is now a collectively-run community. For more information, fill out the contact form.